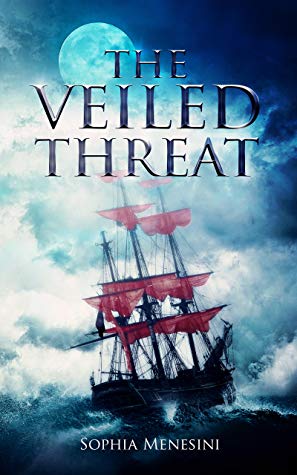 
Captain Shea Lara is the current leader of The Veiled Duchess. The most feared pirate ship in all of Neried. And now, after completing her former mentor’s final score, she’s retiring. Everything seems to be coming to an end… Until a mysterious stranger drags her back into the fold with an offer for a score she can’t refuse. All she has to do is kidnap the crowned princess of the northern Queendom, Princess Joana of Arethusa. The prize is just within reach. But sparks fly as the two women collide. And an obscured threat that could upturn Shea’s entire world storms on the horizon. She’ll face it alone unless she can allow herself the support she needs from old and new allies alike. Something’s coming and Shea is at the center of it.

Let’s start with, how are you this fine day?
-I am doing really well. The school semester is almost at a close, so definitely looking forward to winter break.

Where do you get your information or ideas for your books?
-I came up with the idea for my book at a DnD session I had no desire to go to. It was to meet my best friend’s (then) boyfriend and he was hosting it so I agreed to go with her. I had never played and he handed a character sheet and I made Shea. It spiraled from then, I evolved her into a story and eventually, Nereid was born. The plan is to do nine books most of which I have planned out already. Any real information I get for my books is through Google. I google everything and then the rest I make up.

When did you write your first book and how old were you?
-I wrote my first book at 12, it was a fanfiction and was about fifteen chapters featuring Tony Stark and Steve Rogers. And it has since been taken down off Fanfiction.net and saved deep, deep into my computer files. The next real thing I did was three episodes, 60 pages each, of an idea I called Soulscape and then just short stories over the years. The Veiled Threat is the longest thing I’ve ever written.

What do you like to do when you're not writing?
-I’ve always been into storytelling in any capacity. I love to sing, so usually if I’m not writing and I don’t have homework, I’m annoying my husband with hour-long concerts. I’m also a huge Disney nerd.

What does your family think of your writing?
-They’ve always been super supportive. I think my dad wishes I’d become a teacher but other than that, they’ve all expressed how proud they are about my work and everything I’ve accomplished.

What was one of the most surprising things you learned in creating your books?
-I learned a lot about myself and who I am. As I was writing every character I realized I wasn’t finding myself in a specific one but pieces of who I am in the good and the villains. I learned that no one is going to keep you going, if you want your story out there, you have to stick with it and you have to be the one to persevere.

How many books have you written? Which is your favorite?
-So I’m guessing not counting my twelve-year-old fanfiction, darn. I am in the middle of writing the sequel to The Veiled Threat, The Veiled Descendants, and it’s definitely my favorite. When I wrote TVT I had no idea what I was doing and now with TVD I am still winging it but in a particular way that I know will work out. The characters are more fleshed out and it’s like watching my own kids grow.

Do you hear from your readers much? What kinds of things do they say?
-Not really. I mean I’m an indie author who at twenty-two had a story to tell and no money. So my editing was done through an English major friend who wants to be an editor because I definitely couldn’t afford someone for 2 grand a manuscript. The marketing all done by me, this is truly a passion project I am boss, employee, and slave to this project. I’m a new author but from the people I have heard from the reception has been really heartwarming and it seems like everyone is excited for the sequel.

Have you ever been sent fan art?
-I’m dying for some! I can’t wait, I’m really hoping for some fanart. That’s the dream! Some Shea/Jo and drawings of Aster. I think with everything that happens in the sequel maybe I’ll get some. Fingers crossed!

What do you think makes a good story?
-I think anything can be a good story, I think what matters is how it's told. For me, I love fantasy, paranormal, dystopian, epic fantasy, you name it. The Hobbit was one of my favorite books growing up and my best friend tried reading it once and couldn’t make it past the first five pages. Everyone’s definition of good storytelling is different. It’s part of why I couldn’t be an English major, a lot of what they considered great storytelling was so boring to me. A good story resonates, it makes you feel like you’re a part of it. And I hope The Veiled Threat does that for others as it does for me.

As a child, what did you want to do when you grew up?
-I wanted to be Indiana Jones! I wanted to be an Archaeologist and I think that’s why my genre is historical fantasy. It’s probably also why I’m a History major.

What is that one weird quirk about yourself, that no one else knows?
-I act out my dialogue. I pretend to be whichever characters are speaking and I act out the scene and if it doesn’t flow I change it. But I find it really embarrassing to tell people, so. I’m also obnoxious when it comes to debates, I love them. I will constantly debate anything. Right now I’m in the middle of a four-day Pinterest debate over Iron Man. I’m tragic.

If you had your time back what would you tell yourself about writing?
-If I could go back in time and tell myself anything about writing, it would be to be true to myself. Don’t stop because someone says they don’t like your work or you’ll never be good enough because they don’t know. If you want something bad enough stick to it. Do your best, be strong, and love who you are.

Last but not least,

What advice would you give aspiring writers?
-Age does not matter, money does not matter. If you want to be a published author there are so many mediums available to you now that you can do it. You can get your story out there. You can be heard. Your story is worth telling, persevere. I promise it will be worth it and know that as a fellow writer I am in your corner. I’m tired of fancy publishing houses deciding what’s great or not, they don’t hold the market on the best stories. You deserve to be published whether some elite publisher thinks so or not. You can do it, you just have to be willing to keep going and stay strong. Persevere, you’ve got this and I can’t wait to read your great story.

Thank you for answers my questions 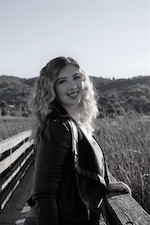 Sophia Menesini lives in Martinez, CA with her husband, and their two small Chihuahuas, Ziggy and Zeppelin. The Veiled Threat is her first novel and the first book in The Veiled Duchess Series. Sophia is an avid tea connoisseur and lover of Scotland with an unconventional memory for obscure Disney and Broadway song lyrics.


You can find my blog, updates, and other entertainment at my website: www.sophiamenesini.com