This post is part of a virtual book tour organized by Goddess Fish Promotions. Thomas Grant Bruso will be awarding a $10 Amazon or B/N GC to a randomly drawn winner via rafflecopter during the tour. Click on the tour banner to see the other stops on the tour. 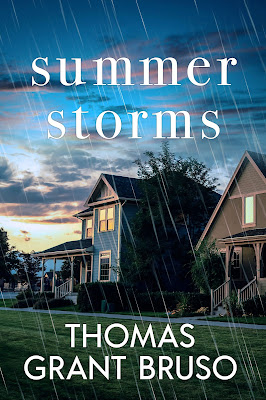 Sixteen-year-old Earl Layman is going stir-crazy. Secluded with the flu inside the four walls of his home and only the escape of his video games to help him through, Earl is struggling to keep his sanity.

That is until he notices the boy next door, seventeen-year-old Rex Chambers, raking leaves in the adjacent yard.

Earl’s summer is about to change. Before another torrential rainstorm hits the small upstate New York town of Betham County, they meet during an awkward cell phone exchange. As they start to connect through occasional texts, Earl and Rex enter the throes of adolescent lust.

In the early stages of forging a lasting connection, their family situations threaten to destroy all they are working for.

The walls of Earl’s bedroom rumbled from the vibrations of the motorcycle. Rex turned and waved. Earl lifted his hand and returned the favor, watching as Rex the Wonder Boy fled out of the yard into a string of traffic on Bauer Street.

A sharp knock on his door surprised Earl, parting the cobwebby thoughts building in his brain as Rex disappeared from his line of vision.

“Honey? May I come in?” his mother asked, poking her head inside his cluttered, smelly bedroom.

“Yeah.” He turned away from the window and looked up at the sweet expression on his mother’s face.

“You talking to someone? I thought I heard voices.”

Earl looked out the window at the neighbor’s empty backyard and shook his head, shuffled back into bed. “Just talking to myself.”

Earl sighed. “What did you make today?”

“Are you feeling any better?”

She walked into the room and touched his forehead with the back of her hand. “You don’t feel as warm as you did yesterday.”

“Do you think you’ll be able to go back to school tomorrow?”

“How about I fix you a plate and bring it up to you?”

“I’ll be down in a few minutes. I need to get out of this room.”

She stopped and stared, studying her son. “What’s wrong, sweetie?”

Earl looked up from his cell phone and shook his head. “Nothing.”

Paula wagged a finger, went to the empty chair at his writing desk, and sat. “I know that look.”

He got up and walked to his closet. He stared at himself in the dusty mirror on the back of the door. “I didn’t realize that’s how I looked.”

He padded back to his bed and plopped down. He sighed and stared up at the low, sloping ceiling.

“What’s on your mind?” Paula asked, giving him all her attention.

Earl glanced in her direction. “I don’t know why, but I was thinking about Shells and Uncle Fred.” He gestured to the photo album spread out across his ruffled video-game-printed bedsheets.

Paula fingered the album and stared down at the familiar faces of her family. “What made you think of Shells and Uncle Fred?”

“What else am I supposed to do in here all day?”

She smiled. “Come on. You can tell me. Why are Shells and Uncle Fred on your mind all of a sudden?” She tapped the leather-bound photo album.

“Something that you told me many years ago about the importance of loving and caring for others.” He shrugged. “I just miss Shells. She was a good cat.”

Thomas Grant Bruso knew at an early age he wanted to be a writer. He has been a voracious reader of genre fiction since he was a kid.

In another life, he was a freelance writer and wrote for magazines and newspapers. In college, he was a winner of the Hermon H. Doh Sonnet Competition. Now, he writes book reviews for his hometown newspaper, The Press-Republican.

He lives in upstate New York.