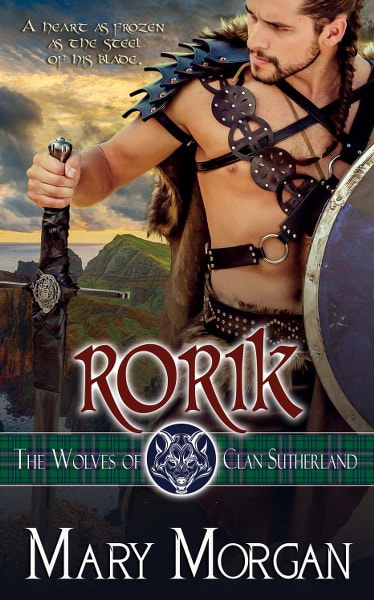 The Dark Seducer is known throughout Scotland as a man who charms many women into his bed. Pleasure is his motto as he obtains information for his king. Yet Rorik MacNeil harbors one secret buried beneath his heart of steel. An unfulfilled conquest plagues both man and his inner wolf, and Rorik would rather suffer death's sharp blade than confront his greatest fear.
As the Seer for the Orkneyjar Isles, Ragna Maddadsson confronts an unknown destiny when she travels across the North Sea to Scotland. In her quest to deliver a message from a powerful vision, she fears the warrior will not listen. If Rorik ignores her warning, Ragna must find a way to forestall his impending death. If unsuccessful, she risks having her heart cleaved in two.
To unravel their true fates, Rorik and Ragna must trust in the power of the wolf.
Add to Goodreads
Amazon * Apple * B&N * Google * Kobo * Books2Read

Bread for a Viking Table

I’m a research geek when it comes to writing my stories. I get giddy when I have to look up anything—from historical herbs, landscapes, naming a character, and food. During my research into Viking foods, I found out what they used as a leavening agent in their breads. I have shared my love of cookbooks with my readers, but I also have another valuable reference source for medieval recipes and techniques. YouTube videos!

Do you ever wonder how a medieval person made cheese? Or what about breads? How did one heal a broken leg? What about medieval weaponry (Sorry, I have a fascination with swords)? There are tons of books and internet sites, but a YouTube video is often times the best for me. I’m able to visualize the process, instead of merely reading about the history of a particular item.

It was customary for the Vikings to eat two meals per day—one in the morning and one in the evening. They ate with their fingers from flat wooden trenchers, or used wooden bowls for porridge, soups, and stews. The Vikings also used antlers and bones that were fashioned into spoons and forks.

A bit of trivia about the antlers they used: Since they didn’t have baking soda, baking powder, or yeast, they did have another leavening agent—reindeer antler salt. The oil is distilled from the antlers and from there salt was created.

This dense bread is an easy version of Viking bread. It’s delicious warm from the oven with butter and/or honey spread thickly over a slice. Or rip off a portion—Viking style. Skål (Cheers) 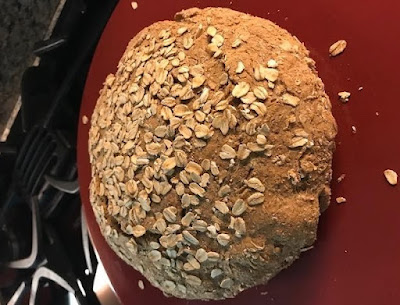 Whisk all dry ingredients together and then add the water.

Stir everything with a wooden spoon until it comes partially together.

Knead the dough with damp hands.

Form the dough into a round disk (approximately 8 inches across). Place bread on baking stone or a greased baking sheet.

Lightly brush the top with water and sprinkle the reserved oats on the top. Put into a cold oven.

Cool slightly and then spread with butter and/or honey.

She stomped the ground with her foot. “I will not be forced to marry a…a heathen!”

He gritted his teeth—her words sparked outrage from his inner beast. Glancing over his shoulder, he offered, “Then which would you prefer? Halvard or me? Make your choice, Elspeth. Did you not consider I do not favor this union either?”

Confusion marred her features. She fisted her hands on her hips and glanced upward. “Did you argue against this marriage with King William?”

“Yet he convinced you?”

When she returned her gaze to him again, resolve and a bit of stubbornness filled them. “Why, Magnar?”

“The king will permit me to continue with my duties with the elite guard, including an important task which requires my attention after our marriage.”

Chewing on her bottom lip, she nodded slowly. “Then you will be absent most months from Steinn?”

“Most assuredly, and when I am there, Erik will be my focus.”

Her face softened as she moved slowly toward Magnar. “Therefore this marriage is in name only for Erik’s protection, aye?”

Annoyed with the direction of his thoughts, he looked away. How Magnar longed to tell the lie on the tip of his tongue. The word ached to be released. He turned and stared into her jeweled eyes in an attempt to offer her any hope of what she wanted to hear.

When she placed a hand on his arm, she whispered, “Tell me honestly, Magnar.”

He swallowed and removed her hand from his arm. Placing it securely over his heart, he stated, “Our marriage will be binding in all ways, Elspeth—in name and body. You may worship your God and I shall do so with mine, but ken this, you will be mine completely.”

The battle of emotions splayed across her face. She stepped closer and pulled her hand free from his. “Then you understand this, Magnar MacAlpin, you can have my body on my terms. The time of my choosing. I am tired of having men telling me what to do. Will you accept my terms?”

By the hounds! Her words sparked his lust further. Magnar concluded he did not want a simpering wife by his side. For the first time, he yearned to have one challenging him—in mind and body.

Grasping her around the waist, he ignored her gasp and cupped her chin. Her eyes widened as he slowly lowered his head. “Agreed.” He breathed the word against her cheek.

Known as the Barbarian, Magnar MacAlpin is a fierce ruler for those under his command. As leader of the Wolves of Clan Sutherland, his loyalty and obedience lies with Scotland. However, the king’s last demand is not something Magnar will tolerate.
After Elspeth Gunn’s brother the Chieftain of Castle Steinn is murdered, she flees with her nephew, and finds safety amongst a band of men who are rumored to be part wolf. When the king forces her to wed a heathen Northman, she fears losing her heart and soul not only to the man, but the beast as well.
In order to restore peace to a shattered clan, Magnar and Elspeth travel a treacherous path that challenges their beliefs. When evil seeks to destroy ancient traditions, will Magnar be compelled to restrain his wolf or allow him free to protect those he loves?
Add to Goodreads
Amazon * Apple * B&N * Google * Kobo * Books2Read

Award-winning Celtic paranormal and fantasy romance author, Mary Morgan resides in Northern California with her own knight in shining armor. However, during her travels to Scotland, England, and Ireland, she left a part of her soul in one of these countries and vows to return.
Mary's passion for books started at an early age along with an overactive imagination. Inspired by her love for history and ancient Celtic mythology, her tales are filled with powerful warriors, brave women, magic, and romance. It wasn't until the closure of Borders Books where Mary worked that she found her true calling by writing romance. Now, the worlds she created in her mind are coming to life within her stories.
If you enjoy history, tortured heroes, and a wee bit of magic, then time-travel within the pages of her books.
Website * Facebook * Twitter * Instagram * Bookbub * Amazon * Goodreads

Follow the tour HERE for special content and a giveaway!
$25 Amazon gift card and a signed print copy of RORIK
a Rafflecopter giveaway