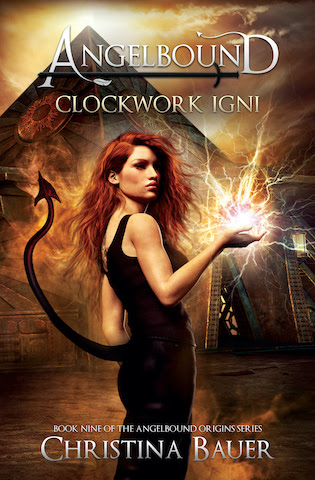 As Queen of Antrum, I rule an underground realm of demon hunters who love finding new caves. Hey, it’s boring down here; I’m glad they all have a hobby. Per usual, I try to act interested about their latest discovery, but all I hear is blah blah blah new cavern blah blah blah Forbidden Tombs blah blah blah massive bronze pyramids blah blah blah creepy ticking sounds. It’s a little odd, but I’m not worried.

Suddenly, the Forbidden Tombs burst through the ground in my home realm of Purgatory. Bronze pyramids smash through abandoned buildings and highways, making rush hour a nightmare. Even worse, the metal structures attract tiny lightning bolts called igni, which are my very special supernatural buddies. Within minutes, every last igni gets stolen away.

Whoever hides inside those pyramids? Time to dust off your mummies and shine up your sarcophagi. Because my husband, Lincoln, and I are breaking in and kicking ass.

Hello and happy summer. My name is Emily and thank you for giving me some of your time.

Was writing your first love?

Writing was more of my first obsession than my first love! In grade one, Sister Virginia had to set aside time for me to tell my stories at the end of the school day or I’d just burst out with them in the middle of class. No, I am not kidding.

I used to write in coffee shops. These days, I write at home (curse you, COVID!)

Is writing everything you thought it would be?

That’s like asking a fish if swimming if everything they thought it would be :) If I could do anything else and keep my inner life alive, I’d probably be at that right now. Writing is hard but it’s just who I am.

Who is/was your favourite character to write about?

It’s so hard to choose—all my characters are faves in their own way! I just finished writing a book about Myla Lewis, the heroine of Angelbound. So, she’s top of mind.

How do you form your story ideas?

For every idea I keep, I toss about ten at the wall and see what sticks. At some point, I know which one is right.

Do you keep notes during the day? (In case something inspires you or, if you had a lively conversation and thought, “Hey that would be great in a book.”)

Absolutely! I used to keep a notebook but now I send myself emails.

Do you write in one sitting or in bursts?

What was the last book you read? Did it live up to your expectations?

I have an official policy to never discuss a book unless I can give it a five out of five. I figure that it’s bad karma to do otherwise. The last one I read was good, but the male love interest withholds critical information before having sex with the heroine. There was much I liked about the story, but I can’t handle a hero who lies. There are enough shitty people in the world. For me, I read to take a break from them.

What are some of your most difficult parts to write?

It’s hard to make my main characters suffer. But if you don’t do that, then there’s no story!

Did this book follow your original plan? Or did it turn into something completely different?

The key plot points stayed the same, but the characters’ inner arcs changed. I thought this would be about Myla learning something about her powers over little supernatural characters called igni, but it ended up being about her rediscovering herself.

Did your characters ever stop talking to you at any point in your writing?

If I try to make my characters do something they don’t want to do, then they absolutely shut up on me. For instance, I once tried to make the love interest, Lincoln, essentially cheat on his wife, Myla. That was so not happening.

Was it hard to stay motivated during your writing process? What were some of your go-to strategies to stay on point?

Oh, my strategy is that I need to pay my bills. If I miss a deadline, I go into Amazon jail and can’t do preorders. So flat out terror is my main motivator.

Do you have a playlist for this book? Or any song that helped you develop a perticital scene?

I create a playlist for every book. In CLOCKWORK IGNI, the list was different in that they’re all movie themes. You can check the playlist out here.

Lastly, what is one key piece of advice you would give to anyone wishing to go down the writing path?

Thank you for your time today :)

You are very welcome! Thanks for the opportunity to share!

Christina Bauer thinks that fantasy books are like bacon: they just make life better. All of which is why she writes romance novels that feature demons, dragons, wizards, witches, elves, elementals, and a bunch of random stuff that she brainstorms while riding the Boston T. Oh, and she includes lots of humor and kick-ass chicks, too.
Christina graduated from Syracuse University’s Newhouse School with BA’s in English along with Television, Radio, and Film Production. She lives in Newton, MA with her husband, son, and semi-insane golden retriever, Ruby.

Be the first to know about new releases from Christina by signing up for her newsletter: http://tinyurl.com/CBupdates