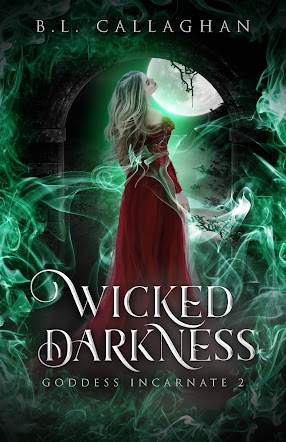 Wicked Darkness
Series: The Goddess Incarnate
Book: Two
By: B.L. Callaghan
Genre: Fantasy
Publisher: Bianca Callaghan
Date of Publication: August 12th, 2021
ISBN: 978-0-6488448-7-7
Pages: 450
Word Count: 120 629
Cover Artist: Maria Spada
"Sometimes it isn’t only villains that crave the darkness."
Sapphira Dawn had been lied to about her identity.
Now the gods agree she should never have been created in the first place.
Her very existence means that the gods aren’t playing by the rules, and as they ready their game pieces for the next battle, Sapphira must gather her allies before they – and the entire mortal realm – are wiped from the board.
But someone close to her is hiding a deadly secret.
A secret that will make Sapphira question what she is fighting for.
As her allies vanish one by one, Sapphira spirals deeper into her unstable magic, drawn in by the addictive high and wicked release it offers.
If Sapphira can’t control the darkness within, the mortal realm will fall, and everything she knows and loves will be nothing more than ashes and dust.
Amazon

I was going to die.

I saw the dagger coming too late to get out of the way, watched it spiraling through the air towards me with astonishing speed.

My eyes were open wide, my mouth was too – like a fish plucked from the sea, suddenly discovering it couldn’t breathe in the open air. It was apparent that shock was not a good look for me; the breath in my chest caught as my muscles tensed, waiting for the impact. Light reflected off the blade, shooting sunbursts through the room on each spin, like a deadly disco ball.
She had actually thrown it. Damn that heartless monster!

The monster in question stood a few short feet from me, grinning wickedly through blood-red lips, another dagger at the ready. Her brown eyes were bright, full of morbid anticipation as they followed the path of the weapon. Long dark hair was tied back in an unyielding braid that ran to her hips, beaded with sweat and blood. Red leather armor protected the majority of her body, a striking contrast to her flawless dark skin.

My shields locked into place a millisecond before the dagger could embed itself in my throat.

The blade disintegrated on impact with the solid mass of jade magic, becoming nothing more than dust that rained down at my feet. I conjured knives of my own, willing the sharp glinting steel and silver into existence, small double-edged and deadly. I barely felt the weight of them in my hands before I tossed them towards her.

They didn’t move as fast as hers had, and she quickly maneuvered out of their way, taking cover behind a crumbling stone wall in the center of the room. No surprises there; I was nowhere near as skilled or experienced as she was. Still, I hoped for some luck – a miracle that gave me the upper hand I needed. I kept the barrage of crafted magic coming, even as I stepped toward her, hoping that the sheer number of deadly blades would beat the grinning assassin.

“Is that the best you’ve got?” She called out, mocking laughter in her voice. I could no longer see her, successfully hidden behind the wall, but I could sense her power – the magic like a beacon in the dark. It was mischievous and sinister, a wicked mix of death magic and sharp, experienced intelligence.

I called up more of my own power, jade smoke forming in the air around me, grinning as it coalesced and solidified into an almost exact replica of myself – a trick that I had only learned recently.

I sent my magic clone towards the wall and the assassin behind it, strengthening the mirage until the aura light vanished within it. Now it looked exactly like me – no one would be able to tell the difference, not even the woman I had unleashed it upon.

Her daggers flew towards the clone as it rounded the corner, the assassin huffing a victorious laugh as they embedded themselves into the armor protecting the chest. The clone fell backward, landing heavily on the floor, unmoving. The killer followed, standing over it, hands empty now.

She was out of weapons at last, just as I had hoped she would be. 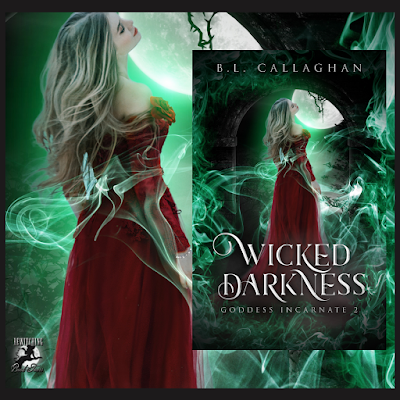 Hello and happy summer. My name is Emily and thank you for giving me some of your time.

Was writing your first love?

It was in a way! I’ve always been a storyteller and before I could write, I’d verbally tell anyone who would listen whatever fantastical story I’d thought up. Writing has always made me happy, and was a great way to offload emotions and frustrations. It also helped me make sense of dreams and events that occurred in my life.

Anywhere that inspiration strikes! I have notebooks all over the house and on my phone, in the car too. I tend to try and do most of my writing at my desk, but it rarely happens that way.

Is writing everything you thought it would be?

Writing itself is, but the publishing side of things is a whole lot different than I thought it would be.

Who is/was your favourite character to write about?

I don’t really have a favorite, but I tend to feel closest to whichever character I write about most on any given day. Lately, that would be Sapphira – the MC in the Goddess Incarnate series. She has been with me for over a decade, and doesn’t look to be leaving me alone any time soon.

How do you form your story ideas?

It depends on the story. Sometimes I plot and plan and revise until the story forms. Other times, like with the Goddess Incarnate series, its like the characters are talking to me, taking over my dreams until I write them out. Sapphira invaded my dreams for months until I started writing her story down.

Do you keep notes during the day? (In case something inspires you or, if you had a lively conversation and thought, “Hey that would be great in a book.”)

Yes! All the time!

Do you write in one sitting or in bursts?

I’m a foster parent, wife, and sometimes educator. So I tend to write whenever I have a spare minute or I’d never get a chance. I’m super proud of the authors that can sit and write for hours on end – they’re amazing! But that isnt me.

What was the last book you read? Did it live up to your expectations?

I read so many books that I love, this year so far I’ve read over 177 books, and have greatly enjoyed most of them. My favorites though are ones full of action, intrigue, magic, and maybe some spice. I love ARC and BETA reading for other authors – B.B. Palomo and Nicolette Beebe have some incredible books coming out that exceeded my expectations!

What are some of your most difficult parts to write?

I struggle with emotional vulnerability and those spicy scenes! I re-write them over and over and over but am never happy with how they turn out. I think the more I do it, the better I get, but arent we all our own worst critics?

Did this book follow your original plan? Or did it turn into something completely different?

My characters love to divert from the plans I set out. So Wicked Darkness is nothing like I’d planned. I think that may be a good thing though, as I’m a sucker for a happy ending, and the story arc is definitely not in that place yet.

Did your characters ever stop talking to you at any point in your writing?

Yes! Sapphira was devastated with quite a few events in the books, and went silent for months. Luckily, there was another character that stepped up so that I could finish the second book.

Was it hard to stay motivated during your writing process? What were some of your go-to strategies to stay on point?

Motivation and I rarely get along, but I try hard to look at my work everyday. I might not add to the word count that often, but reading over what I’ve got down helps keep the story fresh in my mind. I often think about it at random times in the day, and can work through blocks and questions while doing something else. Then, when I get a chance, I go back and fix it – and thank god for my notebooks, or my process would be disasterous!

Do you have a playlist for this book? Or any song that helped you develop a perticital scene?

I kind of do, but nothing written down. There were a few songs that would play in my mind as I wrote some specific scenes, all dark and violent or real tearjerkers.

Lastly, what is one key piece of advice you would give to anyone wishing to go down the writing path?

Just keep writing! Get that story written down before you worry about edits or anything else. Don’t give up, and don’t be afraid to let others see it.

Thank you for your time today :) 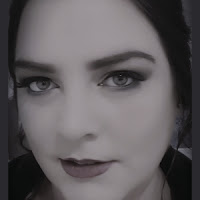 B.L. Callaghan is an Australian Foster Carer, and Early years Educator.
She lives in rural New South Wales with her husband, a changing number of children, a dog and some chickens.
As a self proclaimed creative soul, she has had a passion for writing fiction from an early age.
When not wrangling chickens, children, or dogs, B.L. loves tagging along on epic quests, and being whisked off on magical adventures.
B.L. Callaghan writes children’s books, as well as YA and NA titles.
You can find out more at: www.blcallaghan.com
Goodreads | Instagram | Bookbub | Amazon