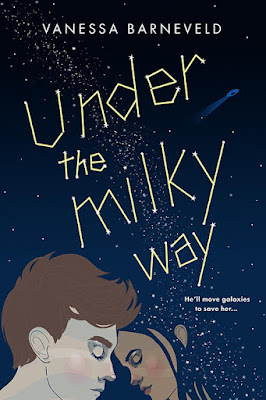 Nothing ever happens in Dawson, Colorado. Until high school senior Cassidy Roekiem’s mom checks into a “wellness center,” but nothing is wrong with her.
Then people start seeing lights in the sky and missing chunks of time, but the town insists nothing is going on.
And now Hayden, the new boy at school who keeps to himself and is more than a little mysterious, starts to notice her like it’s nothing out of the ordinary.
Suddenly, “nothing” is starting to feel a whole lot like something. And everything leads back to Hayden.
The boy she’s starting to fall for. The boy with too many dark secrets for his kind heart. The boy she’s pretty sure isn’t human…

In this excerpt of UNDER THE MILKY WAY, my characters have just experienced what could well be an alien abduction. It’s not their first time and they resolve to make it the last.

Nb. Some characters in this snippet – and throughout the book – use American Sign Language. Translations are set out in italics.

“Are you okay?” I wave a hand in front of her eyes. She doesn’t blink. For the first time in history, Carole Roekiem is speechless. With good reason. I hold my breath and wait for her to react.

“Yes!” we exclaim in unison.

A wide grin spreads across Carole’s features. “Aliens are real. I knew it. Didn’t I tell you guys? Didn’t I show you those videos?”

“Yep, you did!” I say, relieved. I counted on her being a believer in tabloid stories and dodgy UFO footage to start with. Carole doesn’t seem to need much more proof. What evidence could we give her, really?

Her grin is short-lived. “Wait a minute, kids. Aliens. Are. Real. And they’re coming after all of you?”

“Yes, that is the downside,” Jake says flatly.

“Understatement of the millennium,” I sign, without a drop of humor.

Carole frowns, confused. “And you want me to stop them? It’s one thing to believe, but… I’m an old lady. I can’t even fire a slingshot, let alone a laser gun.”

“We’re not asking you to go into battle against aliens.” Gently, I touch her arm. “We don’t know how to stop them. Yet.”

Carole eyeballs the entrance. “What about Nina? She didn’t come back with you. Do you think she’s okay?”

“No, I don’t know where she is now.” I don’t want to say out loud that I have no idea if she’s okay. My stomach tightens at the thought of her all by herself. Then light bulbs ping inside my head. “Wait a second. If Mom was there with us three, that must mean she’s also an abductee!”

Pressing her yellow-painted fingers to her chest, Aunt Carole looks faint. Her eyelids flutter rapidly. “That’s not possible. In all the years I’ve known her and talked about UFOs, she’s never said she even believed in aliens.”

“But Cassidy didn’t know about her abductions,” Alondra signs. “It’s possible her mother had no idea, either.”

“Goodness, how can you even forget something so big?” Aunt Carole says.

“There are ways,” Hayden says. His mouth flattens as he jabs his phone’s keyboard. “The human mind is adept at suppressing painful subjects.”

There’s something about hearing the word suppressing that forms a knot in my stomach.

“Who are you texting, Hayden? The cops?” I sign.

“Right.” Hayden looks up sharply, then taps on his phone so fast that I’m sure he’s breaking the world record for texting.

“First we have to convince them we’ve been kidnapped at all, let alone by aliens,” Jake says. He scrolls through his phone and frowns. “I can’t find any posts about any UFO landing today. You’d think there’d be thousands already.”

“I’m not contacting the police. This has to be handled another way.” Hayden reads an incoming message, and his features turn to granite. He pockets his phone and continues pacing.

The knot in my stomach tightens. “Hayden, you’re going to wear a groove in the carpet. Talk to me. Is there something going on with your family unit?”

“You could say that.” Hayden turns. His eyes are full of conflict. He grimaces as his phone buzzes again, but he doesn’t answer it. “I’ve just received orders. We have to move.”

“You can’t. You just moved in,” I protest. Hayden puts a palm to his head. “Oh. Wait. Is there a sinkhole in your neighborhood now?”

“No. It’s more like a black hole,” Hayden mutters. He pulls out the phone and reads the message again as if to make sure he’d read it right the first time.

Jake’s eyes are wide and wild. “We’re dealing with sinkholes? As well as aliens? What the ****?”

I give him a rundown about the rumors, all the while keeping my eye on Hayden. He looks like his whole world is crashing down on him. “But you’re sure the orders are because of sinkholes, right, Hayden?”

Grasping my hand, he says, “I need to talk to you. Alone.” Australian Vanessa Barneveld lives in a 19th-century house in inner-city Sydney with a 21st-century husband, two eccentric cats and one ghost—all of whom provide inspiration for her spirited novels. In addition to her writing career, she’s part of a crack team that produces closed captions for deaf TV viewers and audio descriptions for the blind. An avid traveler, she enjoys the journeys almost as much as the destinations. She freely admits to being food motivated and will stop at nothing to find the perfect hot chips wherever she roams around the world.