I am thrilled to be hosting a spot on the CITY OF THIEVES (Battle Dragons #1) by Alex London Blog Tour hosted by Rockstar Book Tours. Check out my post and make sure to enter the giveaway! 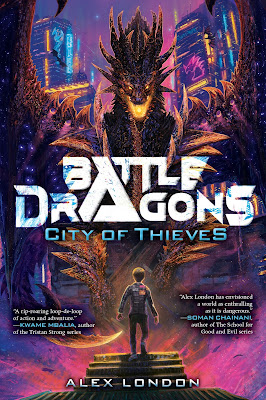 In a modern mega-city built around dragons, one boy gets caught up in the world of underground dragon battles and a high-stakes gang war that could tear his family apart.

Once, dragons nearly drove themselves to extinction. But in the city of Drakopolis, humans domesticated them centuries ago. Now dragons haul the city’s cargo, taxi its bustling people between skyscrapers, and advertise its wares in bright, neon displays. Most famously of all, the dragons battle. Different breeds take to the skies in nighttime bouts between the infamous kins―criminal gangs who rule through violence and intimidation.

Abel has always loved dragons, but after a disastrous showing in his dragon rider’s exam, he's destined never to fly one himself. All that changes the night his sister appears at his window, entrusting him with a secret...and a stolen dragon.

Turns out, his big sister is a dragon thief! Too bad his older brother is a rising star in Drakopolis law enforcement...

To protect his friends and his family, Abel must partner with the stolen beast, riding in kin battles and keeping more secrets than a dragon has scales.

When everyone wants him fighting on their side, can Abel figure out what's worth fighting for?

"Battle Dragons is the riproaring opener to a surefire hit series. Alex London has envisioned a world as enthralling as it is dangerous―a society much like our own if it was built on the backs of giant fire-breathing dragons. Readers are sure to burn through the pages as they follow Abel through the shadowy underbelly of Drakopolis, dodging dragon-rider street gangs and a ruthless secret police to save his family. Abel is an endearing and relatable hero struggling under expectations as the youngest of three siblings, and his journey in building self-confidence is sure to ring true with young readers. Above all, cutting through the action is a moving tale of friendship and family, which is at the heart of this thrilling fantasy."- Soman Chainani, author of The School for Good and Evil series

"A rip-roaring loop-de-loop of action and adventure, Battle Dragons will keep readers at the edge of their seat as they cheer on Abel and his friends."- Kwame Mbalia, author of the Tristan Strong series

My Rating: 4
Mu Recommendation: 8
(I received this book free in exchange for my honest review)

This book was a super fun read. The had a nice steady pace, the plot points stayed consistence, and the action was well crafted an entertaining. I was engrossed in this book and at times forgot I was reading, as the vivid images and detail had me enclosed in this world.

I liked the mix of mythology and the modern-ish dystopian type of writing. It brought a uniqueness it and it added something just right to a genre that's been overdone. I like the MC's and the way the book opened. It set the stage and pulled you in. Nothing like a cryptic message from your sister and finding a rear dragon to kick off a wonderful adventure, that could get you killed.

I will say that the way non-binary was written and described didn't sit well with me. It's more complex, and having it as gender non-binary, was odd. I get that the author was trying to explain that identity to children, but I believe more research should have been done. As being non-binary is different for all those that identify as such. I'm all for getting information there, but we need to take care in how those that do not identify, or are not in that flied of experiences, deliver that information.

Overall this is a wonderful action adventure book for all ages. It's has a little bit of everything and it brings new elements to the table that will keep engaged and reading. So please take my high recommendation and stamp of approval that you will get lost in this unique world of dragons. 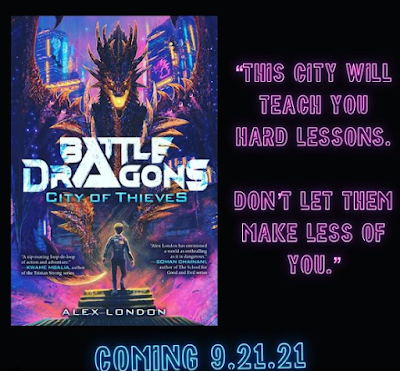 “OPEN THE WINDOW, PLEASE!” she shouted, although the roar and screech of the city’s dragons directly above their building made her voice almost impossible to hear.

Abel knew what she was asking— because what else would she be asking?— but he was frozen in place. He was a little embarrassed his big sister was seeing him in his Dr.! Drago boxer shorts playing with his DrakoTek cards, and he was a lot shocked to have seen her leaping from building to building at midnight.

He remembered the actor whose teenager had been eaten on cleaning night. Was this just something teenagers did, recklessly courting death and disaster? Now that he was a teenager, would he end up doing it too?

Unlikely. He didn’t even like heights, which was how he’d failed his Dragon Rider Academy Entrance Exam when he was eleven and ended up at Municipal Junior High 1703.

“Um, like now, please?!” His sister pounded on the glass to make sure he understood.

“Right! Right!” Abel unlatched the window. Even in the face of great and imminent peril, he was easily distracted.

That was also why he’d failed his Dragon Rider Academy Entrance Exam. According to the report they got in the mail with his Notice of Failure, he was reckless, easily distracted, and afraid of heights. Not a great combo for a dragon rider. He really wished he hadn’t seen the report. Sometimes it was better not to know what adults thought about you.

The moment he slid the window open, his sister tumbled into his room and slammed it shut behind her.

A huge claw swept over the window frame, screeching across the dragon- proof glass,
backlit by thefire in the sky. It cast a huge claw- shaped shadow over Abel, his sister, and the wall of his bedroom.

All apartment buildings were made with Dragon-Resistant Materials, so they were safe
inside. The claw vanished above the window frame, and Abel fell back onto his bed,
trying to slow his heartbeat down by rubbing Percy’s chin and taking deep breaths.
Goatmouths were a lot bigger up close than he’d thought they’d be.
Military riders and Dragon’s Eye agents flew dragons three times their size or more.
Abel was relieved for a second that he had failed his Academy entrance exam. As much as
he dreamed of being a dragon rider like his oldest brother, Silas, he was more likely to get
a job at Chimera’s All- Night Coffee + Comics like his sister. He loved comics and games
and books, and he imagined he’d love coffee too, if he was ever allowed to try it.

Lina was supposed to be working the night shift at Chimera’s right now. 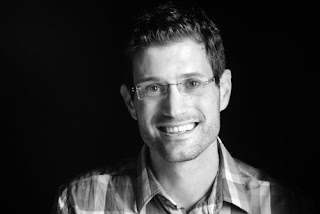 ALEX LONDON is the author of over 25 books for children, teens, and adults with over 2 million copies sold. He’s the author of the middle grade Dog Tags, Tides of War, Wild Ones, and Accidental Adventures series, as well as two titles in The 39 Clues. For young adults, he’s the author of the acclaimed cyberpunk duology Proxy, and the epic fantasy trilogy, The Skybound Saga. A former journalist covering refugee camps and conflict zones, he can now be found somewhere in Philadelphia, where he lives with his husband and daughter or online at