The Dark Prince has arrived.

Garrin Branimir, Prince of Dark Kingdom, has been trapped in endless winter for centuries, along with his people. His only hope of saving them is to find the woman with the power to destroy the magical barriers imprisoning Dark Fae. With her by his side, he and his kinsmen will finally be free.

But Lex Meinrad isn’t full Fae, and she wasn’t raised in his land, content to obey her prince’s every order. She refuses to do his bidding—no matter how intense the sparks between them fire.

With time running out, Garrin must convince this impossibly stubborn woman to cooperate before his enemies bend her to their will. And, unlike him, they’ll choose force over seduction…

—
Each Halven Rising book is a standalone romance with an overarching story that connects the series. The books can be read out of order. 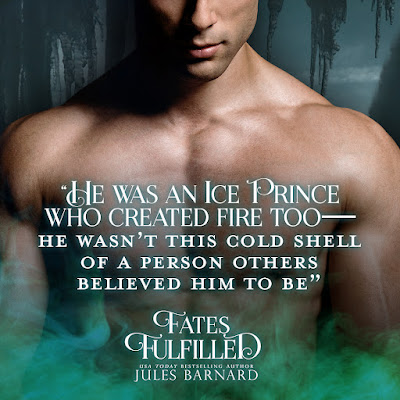 Garrin Branimir, Prince of Dark Kingdom, strode down the dingy hallway where the Fae kept their half-human, half-Fae Halven, and paused near a dark-haired female on his right. The woman grinned as she passed.

She was attractive. For a human. Or Halven, given the building.

Hundreds of years ago, Fae from other kingdoms in the Faery realm of Tirnan built Dawson University to monitor their half-blood offspring, known as Halven. Particularly those Halven who developed magical powers. As far as anyone knew, no Halven born of Dark Fae blood existed due to the Land of Ice that blocked Dark Kingdom from any other living being, including in the Earth realm. But Garrin suspected the one he searched for could be hidden here.

The prophecy stated a female with Dark blood would save his people. Garrin had run out of options in Dark Kingdom. No one possessed the power needed to create safe passage to other lands. The Earth realm was his last hope for finding the one.

He fanned his hand in front of the female’s face before she passed. He’d been testing all females in the building for weeks. So far, none had deflected his magic.

The brunette blinked, then stumbled. Then her lips turned blue, and she began to choke, her dark eyes watering as ice formed across her face. Sounds of suffocation came from her throat.

She was indeed Halven. He wasn’t as good at sensing magic levels as those with the ability, but he could tell she was more than human now that he was close. Only she wasn’t the one for whom he searched. She was simply a half-blood, like all the rest.

Garrin sighed and waved forward the two soldiers behind him. “Heal her and blur her memory.”

This girl might not be the one, but Garrin would search for the female who was until his dying breath, which should give him a millennium, give or take.

“Your Highness,” Amund said, a portal creator and one such Fae with the ability to sense energy levels. “The earthbound Fae soldiers have discovered our presence.”

Garrin let out a long-suffering sigh. He’d spent the last hundred years attempting to cross the barrier separating his kingdom from the others of Tirnan. It had been nigh impossible to make it across the Land of Ice weakened, only to be attacked by deadly Fae soldiers from other lands. Until an uprising left said lands vulnerable. He’d finally breached the borders of the other kingdoms and made it to the Earth realm, and he wasn’t about to turn back now. “The Fae living on Earth are a nuisance. How am I to find the girl with them nipping at my heels?”

Amund stared off in the distance. “We have two minutes before they discover us.”

His men had returned the brunette to the dwelling from whence she came, and Garrin looked down the hallway one last time. “Very well. We will return another—”

Someone exited a door halfway down. A female. Tall.

Garrin didn’t get a good look at her face because she’d pulled a hood over her head that dipped below her eyes, but he held up his hand in a staying motion. There was something about this one… He was drawn to her.

“I sense no power,” Amund said.

Fae were taller than humans, and many Halven took on the trait. “I will test her anyway.” The closer she got, his urge to be near her grew.

“Your Highness, please hurry.” Amund glanced back. “We have a minute at most.”

The female kept her head down as she moved closer. She didn’t appear to see Garrin standing there.

Odd, that. At over seven feet, Garrin wasn’t easily missed in the Earth realm. The girl was so preoccupied, in fact, that she nearly ran into him.

She stopped abruptly a couple of feet away, and her chin tilted up. Her face flushed, and she averted her gaze. But not before Garrin caught sight of her beautiful golden eyes, the mysterious energy behind them hitting him like a bolt of lightning.

There was no time. Garrin needed to test her quickly and be gone. He pursed his lips and exhaled, giving her more of his powers than he’d given other females they’d encountered.

She blinked, and ice crystallized around her nose and lips…and melted as quickly as it had formed.

Her gaze collided with his, her expression one of surprise.

Garrin’s entire body lit up with desire so powerful it took his breath away.

He stepped back, astonished at his reaction to the woman, and at what he’d discovered. For so long he’d fought death and starvation and battled enemies to reach the one. No Dark Fae were thought to live in the Earth realm, but Garrin suspected she was hiding here, and now he’d found her in the form of a Halven.

Elation coursed through him. After all this time, he’d succeeded where no other Fae had for hundreds of years.

He would save his people from isolation. He would make his father proud…and he would have the female.

A smile slowly pulled at the corners of his mouth. “Take her.” 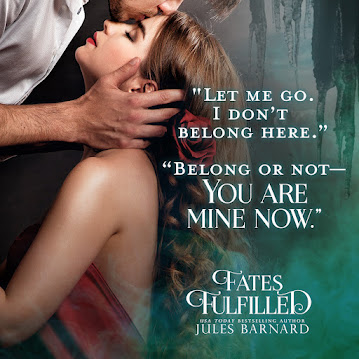 Jules Barnard is a USA Today bestselling author of contemporary romance and romantic fantasy. Her contemporary series include the Never Date and Cade Brothers series. She also writes romantic fantasy under the same pen name in the Halven Rising series Library Journal calls ''...an exciting new fantasy adventure.'' Whether she’s writing about sexy men in Lake Tahoe or a Fae world embedded in a college campus, Jules spins addictive stories filled with heart and humor.

When Jules isn’t in her sweatpants writing and rewarding herself with chocolate, she spends her time with her husband and two children in their small hometown on the Pacific Coast. She credits herself with the ability to read while running on the treadmill or burning dinner.

To learn more about Jules, visit her website at: julesbarnard.com 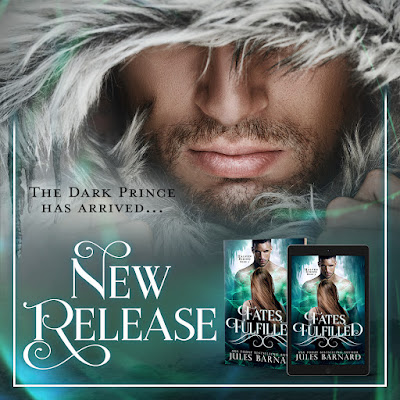