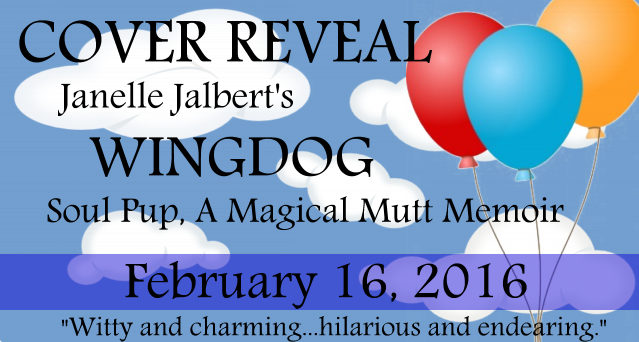 Congratulations to Janelle Jalbert on her new cover for WINGDOG: Soul Pup, A Magical Mutt Memoir! 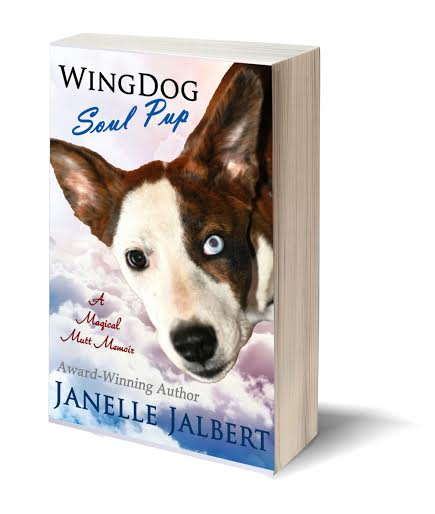 It’s love at first sight...for both of them. An abandoned yet tenacious pup with one blue eye and one brown eye beats the odds and is enlisted as one woman’s WINGDOG. It's a role he takes seriously, but he knows that his human needs more than just another set of eyes and ears. He must show her how to laugh and how to love again. His loyalty knows no bounds, and he takes his duties seriously riding shotgun as the pair travel life’s highway.

A dog may be man’s best friend, but the truth is…A WINGDOG is truly a woman’s gift.

For readers who enjoy contemporary canine classics such as MARLEY & ME, THE ART OF RACING IN THE RAIN, and A DOG’S PURPOSE, Janelle Jalbert’s ‘Magical Mutt Memoir’ combines the best of these storytelling traditions. Told as a memoir - adhering to how events unfolded - one woman seeks establish a new life after moving across the country from California to North Carolina.

Her chance at a new normal arrives in the form of Goose, a pup that melts not only her heart but also the hearts of everyone that he meets. As they travel coast-to-coast and places in between, the bond that the two share proves that love and loyalty can transcend even the greatest of obstacles.

WINGDOG: SOUL PUP is a heart-warming, emotional – and oftentimes comical – tale of how one pup becomes the consummate WINGDOG only to transform into the ultimate Soul Pup. 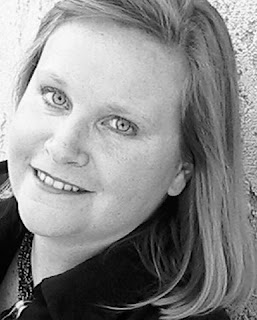 Janelle Jalbert had two light bulb moments at the age of 10. One involved teaching. She began teaching her stuffed animals daily lessons after school. The other was the result of an obsession with reading. Just like her dad, Janelle loved to plow through books like any child racing to the presents under a tree on Christmas morning. Her favorite YA series featured a main character that aspired to be a writer, and Janelle exclaimed “I wanna do that!”

Flash forward to a decade or so later, Janelle pursued her love of teaching, but her passion for writing remained a glowing ember. It took a car accident to get Janelle writing once again. She wrote and published Success Skills for Middle and High School Students (2001) to help her students with their major educational transitions. Not one to do the same old thing as everyone else, Janelle had a hint of things to come when she was looking for a “different” topic to focus on for her master’s thesis. She was drawn to Magical Realism. Years later, she blended her love for helping others and creative entrepreneurialism with her writing and contributed a chapter to Conscious Entrepreneurs (2008). It was another hint of what was to come for Janelle with the theme for her segment in the anthology being a call to take charge of your life by becoming the star of your life by step into your own spotlight.

It sounds simple enough, but Janelle’s journey towards fulfilling her early dream was not that straight-forward…for either better or worse. After transitioning from the traditional classroom to online teaching and moving from K12 to university teaching, Janelle decided to pursue a doctoral program. While juggling teaching, studies, and growing a college admissions counseling business, Janelle had another light bulb moment during a trip to a NASCAR race weekend in Fontana.

Janelle and her sister were always around cars and loved racing. One of their rituals was making the trek to racing events in Southern California. That morning in the spring of 2009, Janelle watched people walking in and out of the garage as practice sessions were going. Again, she heard the voice “I wanna do that!” Given that she was teaching English and doing studies in education, it was a fleeting moment that she quickly forgot.

Three months later, after covering graduate schools in the Los Angeles area for examiner.com, Janelle got a wild idea. She asked her editor in education for the sports editor’s contact information and pitched him the role of Southern California Motorsports Examiner. Not only did she land the position, she was also named NASCAR Truck Series Examiner. By the time that NASCAR returned to Fontana that fall, Janelle was working the garage as a reporter and photographer. In fact, it wasn’t until she was halfway through her first morning there that she remembered what happened during the spring race. It was a little bit of magic, a touch of nerve, and some talent that had Janelle smiling that October day. Janelle went on to travel the country covering motorsports, including moving to North Carolina for an extended period, while still teaching and pursuing graduate work.

The unlikely fairytale story did not an easy happily-ever-after ending though. As her fortieth birthday approached, the rumblings of a major life change began. Even though Janelle loved teaching, she realized that education was not where she needed to be. Then the universe reaffirmed her belief when her teaching position was phased out. Though Janelle was already growing a small business startup, she struggled to find her footing.

Months later, Janelle walked out of a local restaurant and was hit with a story idea that grabbed her. She hadn’t worked on fiction since she was a teen, but the story kept screaming to her. Another voice gave her pause though. “You need to do it in 30 days.” It seemed illogical and even melodramatic. (No, it wasn’t a NANOWRIMO challenge either.) Still, she began drafting. It flowed, even if it wasn’t in linear fashion, and Janelle felt the fire back in her life.

Then, Janelle learned why there was a 30-day warning. She was about 90% done with the draft when her father went to the hospital. He was diagnosed with a brain tumor and had surgery days later. Though he pulled through the procedure, doctors explained that he had multiple advanced cancers. In the weeks that followed, Janelle finished the draft while her dad battled cancer. He was too ill to read it and passed on New Year’s night. The person who gave Janelle the love of the written word was gone, but life was to take a few more turns.

By spring, Janelle pursued writing in all types of formats, from copywriting and ghostwriting to other genres, to pay the bills. In March, she submitted to Flash Fiction Magazine and was published on the first attempt. A month later, she took another leap and pitched a book to another publisher. The topic was rejected, but they asked if she had any expertise in the other areas that they were seeking. By the end of the week, Janelle had a book contract to write Wine for Beginners. While drafting that book, Janelle also asked to contribute on a regular basis to Flash Fiction Magazine which led her to develop a collection of stories.

Within months, Janelle finished the draft of Wine for Beginners. After finalizing the submission, she poured a glass of bubbly and went to celebrate with her mother and sister. The elation did an immediate 180. Instead of toasting for a much needed celebration, she was helping her sister prepare to go to the emergency room. Less than 12 hours after pouring the glass of bubbly, Janelle’s sister lost her fight with complication from a life-long disability.

So, Janelle’s still working on that happily-ever-after ending. In November 2014, Janelle publishing a collection of flash fiction title Flash 40: Life’s Moments. Wine for Beginners was released in 2015, and the novel, Triangulating Bliss, which rekindled Janelle’s writing passion is due for release in the Fall of 2015.

Janelle currently resides in Southern California, with her pack of pups. When the dogs allow, Janelle regularly returns to her second home of sorts in North Carolina. Her interests are diverse and keep life interesting by giving her experiences that make great stories. More than likely, you can find Janelle enjoying a good wine with friends, feeding her wanderlust beast, or giving into her guilty pleasure of a HEA story in film or written form.

Her latest book is the memoir, WINGDOG: Soul Pup, A Magical Mutt Memoir.