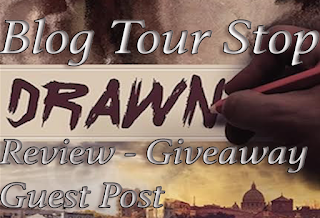 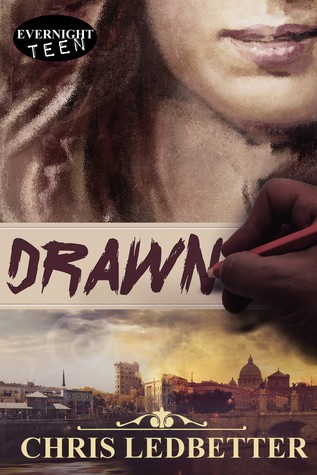 Drawn
By: Chris Ledbetter
My rating: 4 of 5 stars

Caught between the sweltering fall landscape of Wilmington, NC beaches and southern illusions and expectations, all sixteen year-old Cameron Shade thinks about is art. That, and for Farrah Spangled to view him as more than just a friend. Cameron longs to win her heart through art.

After several warm interactions with Farrah, including painting together at the beach, Cameron discovers just how complex Farrah’s life is with her boyfriend and her family. Following a tense run-in with Farrah’s father, she forbids Cameron to ever speak to her again, but Cameron’s convinced there’s more behind the request.

To impress Farrah with a last-ditch effort, Cameron sketches her portrait. But the sketchbook he uses hides a dark secret. Farrah’s now in grave danger because the sketch he drew of her siphons her real-life’s soul into the sketchbook. Cameron now has twenty days to extract Farrah. To save her, he must draw himself into the book.

If he fails… they both die.

This was a fun read that had me guessing until the very end, but in saying that I have mixed feelings about this read. This book is what I like to call, driving through rush hour. Why? Because there's a lot of fast and slow moments, stop and go.

The beginning sets the stage for our lead, Cameron. For openings, it’s now one of my favourites. It was original, calming, and I felt like I was there with Cameron, watching the waves, and smelling the salt air.

The stories pace is good into those first few chapters. We learn more about Cameron and what his life is like. We meet his crush, Farrah, who is his eyes, can do wrong. She’s already taken, making this “love” a one sided one. I don’t quite know if I like her or not, she wasn’t all that present and all you really get about her is what Cameron thinks and the one, not-so-date, that was sort-of-a-date? It wasn’t enough for me to care about her.

After that point the story takes a bit of a dive, there’s about six pages where he is playing a war type game. I don’t care that he was playing the game, but those six pages were basically a transcript of the game itself. It all honesty it was filler and it didn’t need to be there. One page, maybe two, but not six. I skipped over most of it because it didn’t do anything for the me or plot.

There was a lot of that weird spacing. Especially after the dire situation that left Farrah fighting of her life. The sense of panic, and desperation wasn’t really there at the start, but did pick up towards the end. In truth I felt that it was spaced to far apart or better yet, it was stretched out to make the book longer. The last 30% of the book was fast, there was lots of action, suspense and had my heart pound. It was the true highlight of the book.

I did like Cameron, he does a lot of growing throughout this story. He’s talented and strong in his own right. He owns up to his mistake and takes ownership in that fact. When he was in too deep, he reached out for help knowing the consequences, and knowing that he might get rejected. He knew that in order to fix his mistake, he needed help, even if it might cause him his life.

Though I gotta say, my favourite character was Vittoria. She was mysterious, with a hint of evil. You don’t really know who’s side she’s on until the end. She’s a survivor, strong and cunning. She knows how to play her cards, and knows what to say to get what she wants. In truth, I felt that she was the main female lead. That and I felt like she had more of a connection with Cameron then Farrah.I hate to say it, but I was rooting for her.

The ending was amazing, but in my opinion, the ending could have ended with a twist, something unexpected. Cameron has a choice at the end, and I believe he should have taken the road less traveled. For a spelt second I though he was going to do it, I was biting my nails hoping he would, but that was not the case. In saying all that, the ending was still pretty outstanding and pulled at the heart strings. I had a wicked smile on my face, and it my or may not have looked goofy.

I highly recommend this book. Despite the awkward spacing and my crushed dream for the ending, this story is original and flat out, good. The writing is solid, strong, and the description was exceptional. I felt like I was in that world, both worlds, seeing the bright colours and feeling the sounds. I would to thank Chris Ledbetter for giving me the opportunity to read this one of a kind story.

Social media has created one of the most efficient means of interaction and communication on a mass global scale. Without the Internet, I had all local friends. I now have friends in Italy, Australia, Canada, United Kingdom, Greece, Korea, and all over the United States. But social media means more than that when the topic of promotion arises because social networks amplify any message. It’s like the old multi-level marketing concept adapted to word-of-mouth.

Any time you share a message and then the people in your social network interact or share it, your message increases its reach in ways regular word-of-mouth can’t begin to touch, in part because it’s so fast. A message, good or bad, can go viral in seconds. In a similar fashion, bloggers are the standard bearers of the book world, leading the charge in content creation for literature. Over time, they gain followers who hang on their every word and when they post their reviews, the followers drink in the message, good or bad… and then proceed to share it widely. But being readers themselves, those same followers also follow the bloggers to find their next reads.

So for authors, social media is invaluable as a promotional tool. There’s no substitute for face-to-face communication like there is at book signings and conferences. But it’s difficult to beat the reach of social networks. Without them, there’s no way for me to reach my fans in Italy, United Kingdom, Australia, et al. 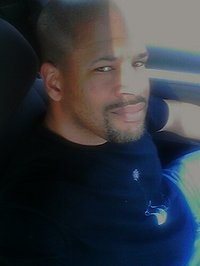 Chris Ledbetter grew up in Durham, NC before moving to Charlottesville, VA in 11th grade. After high school, he attended Hampton University where he promptly "walked-on" to the best drum line in the CIAA. And, without any prior percussion experience. He carried the bass drum for four years, something his back is not very happy about now.

After a change of heart and major, he enrolled in Old Dominion University and earned his degree in Business Administration. He's worked in various managerial and marketing capacities throughout his life. While teaching high school for six years in Culpeper, VA, he taught business management, business law, marketing, and sports marketing, and also coached football.

He has walked the streets of Los Angeles and New York City, waded in the waters of the Atlantic and Pacific oceans, and climbed Diamond Head crater on Hawaii and rang in the New Year in Tokyo, Japan. But he dreams of one day visiting Greece and Italy.

He's a proud member of SCBWI (Society of Children's Book Writers and Illustrators) and a strong supporter of the Need for Diverse Books. As a self-described, young reluctant reader, he writes young adult stories specifically to reach other reluctant readers. As a participant in the prestigious Nevada SCBWI Mentor Program, he was blessed to be mentored by Suzanne Morgan Williams, 2012 SCBWI member of the year.

He now lives in Wilmington, NC with his family, including three cats.