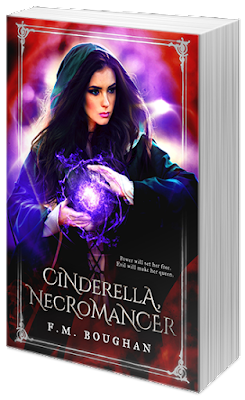 Darkness can only be controlled by those with the darkest of hearts.

Ellison lost her mother at an early age. Now, sixteen, her father has found love again. He’s happy and doesn’t quite notice that Ellison does not get along with his new wife or her vicious daughters.

When Ellison discovers a necromantic tome while traveling the secret passages of her father’s mansion, she wonders if it could be the key to her eventual freedom.

Until then, she must master her dark new power, even as her stepmother makes her a servant in her own home. And when her younger brother falls incurably ill, Ellison will do anything to ease his pain, including falling prey to her stepmother’s and stepsisters’ every whim and fancy.

Stumbling into a chance meeting with Prince William during a secret visit to her mother’s grave feels like a trick of fate when her stepmother refuses to allow Ellison to attend a palace festival where she might see him once more.

But what if Ellison could see the kind and handsome prince again? What if she could attend the festival? What if she could have everything she’s ever wanted and deserved by conjuring spirits to take revenge on her cruel stepmother? And what if she actually liked watching her stepmother suffer?

As Ellison’s power grows, she loses control over the evil spirits meant to do her bidding. And as they begin to exert their own power over Ellison, it becomes harder to tell whether it is she or her stepmother who is the true monster.

( I received this book free in exchange for my honest review )

This dark tale on a old classic isn't something you should pass up! I love retellings, and though Cinderella's isn't one of my favourite fairy tales, I was entrance with this read from the first page until the last!

This isn't your normal retelling. It's dark, twisted and a little frightening. We are taken down a different; what if rout, and in this story Ella isn't the perfect sweet girl form disney. She is relatable, she's flawed and she is badass. The romance, it isn't shoved down our throats, it's steady, it's natural and it has you rooting for them.

I like the little brother aspect, it gave Ella something extra, a desperation you can call it. And it to me gives her a real reason for not packing up and leaving the abuse. She loyal to her family, and she'll stop at nothing to be with/save them.

This is a solid read that I highly recommend. Though it follows the Cinderella plot, it is anything but the story we're use to. This twist tale of love, sorrow and death will have you on the edge of your seat. Don't turn off the lights

They left. I did not hesitate.
I set up the parlour as if by rote, though the ease with which I fell into the routine stirred a concern. I buried it.
The spirits did their work, and I would do mine.
I had no doubt of my power, though if anyone had asked, I couldn’t have explained why I continued to tempt my eternal fate. I was as though driven by some force—something unseen—to use the ability, now that I had it.
I don’t excuse what I did. I only wish to explain why I continued to seek retribution despite my misgivings.
What is more, I longed for something deeper. Harsher. More severe, for a part of me believed that no matter what, I still held control over the spirits and what they did. And that same part of me wanted to see Charlotte suffer.
And so it was with this in mind that I turned further pages in The Book, knowing full well what I sought.
“To inflict harm,” I read, “make an image of wax on the day and in the hour of intent, in the name of the one to be harmed. Thus, you should use wax of candles burned at a funeral, and on the likeness, fashion hands in the place of feet, and feet in the place of hands.”
And so I did. With candles from my room that I had saved from Mother’s funeral, I molded a crude figure of my stepsister. With my fingernail, I inscribed Charlotte’s name on the wax doll’s forehead, and on its chest and shoulder, carved the book’s images of circles, planets, and five-sided stars.
Then I called my spirits. With the bridle still, I had no need of the first spirit. To the second, I had only to repeat my request. And to the third, I gave the wax doll, which he consecrated with spit smeared over the doll’s eyes.
“What would you have me do?” Oliroomim spoke with an unsettling eagerness.
From my hair, I drew a pin. With a hollowness in the pit of my belly, I pierced the spine of the doll. 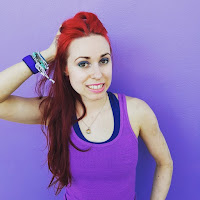 F.M. Boughan is a bibliophile, a writer, and an unabashed parrot enthusiast. She can often be found writing in local coffee shops, namely because it’s hard to concentrate with a cat lying on the keyboard and a small, colorful parrot screaming into her ear. Her work is somewhat dark, somewhat violent, somewhat hopeful, and always contains a hint of magic.
Website | Twitter | Facebook | Goodreads