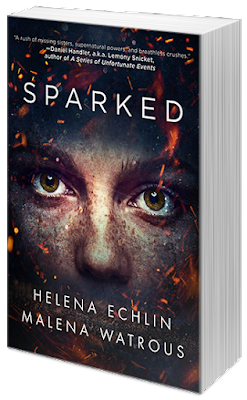 Fifteen-year-old Laurel Goodwin wakes up to find her older sister Ivy missing from their Airstream trailer in the Oregon redwoods. A recurring nightmare convinces her that Ivy was abducted, but no one takes her dream seriously, including her mom. Laurel, a loner, has to learn to ask for help, and Jasper Blake, a mysterious new kid who shares her love of old books, quickly becomes her ally. Together they find their quiet town holds a deep secret and is the epicenter of a dark prophecy.

Laurel soon learns that her worst enemies, mean girls Peyton Andersen and Mei Rosen, are developing powers that she needs to find and save Ivy. With time running out, Laurel realizes that power doesn’t always take the form that you expect. And once she learns to look beyond her snap judgments, she develops an unexpected gift of her own.

Excerpt:
The knocking woke me up from a dead sleep.
Whack, whack.
I sat up, blinking myself awake. The sky outside our porthole-shaped window was still dark, the silhouettes of the redwoods just a shade blacker. Rain lashed at the glass. Wind rocked the Airstream back and forth.
Whack.
There was that knocking again. I leaned over to wake Ivy. Our beds were so close, they practically touched—
But Ivy wasn’t in her bed.
Whack, whack.
She must have snuck out and forgotten her key. I needed to let her in fast. Our mom was a heavy sleeper—especially if she’d smoked a “medicinal” joint before bed—but there was a limit to what she could tune out.
When I eased open the accordion door to the bedroomette, a river of cold air whooshed over me. I hurried to the front of the trailer, where the door was wide open, banging in the wind.
I stepped out onto the top cinder-block stair, straining to see through the rain. “Ivy?” I called into the darkness, but no one answered. The icy wind cut through my pajamas and I shuddered, wrapping my arms around myself. Ivy must have left the door unlocked, and the storm had blown it open.
Still, it creeped me out.
I wasn’t used to living in a tin can on the edge of civilization. Our new property bumped up against the state park. We had no neighbors for miles, but hikers, poachers, and the occasional homeless person liked to use our land as their playground. Mom said that we were safer out here than if we lived in some apartment in town. Statistically, there were fewer weirdos in the vicinity.
But all it takes is one. 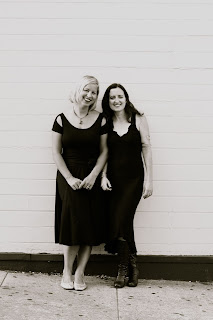 Hello! We are both novelists, but if you’ve ever tried to write anything, you know that writing can be a lonely, angst-filled business. So one night over a cocktail or two, we came up with a solution: write our next book together. Malena already had an idea: a girl’s sister is kidnapped and she has to rely on mean girls with superpowers to get her sister back. We couldn’t resist seeing where that story would take us – a wild ride that includes a loner girl who wants to be a writer and a gorgeous boy who can shoot fire from his eyes but also loves to talk about books. And an ancient Zoroastrian prophecy. And pie shakes. (OK, so maybe we got a little carried away.)

We’ve both published solo novels (check them out here and here) and had no idea how co-writing would work out, but we pounded out the first draft in a white-hot frenzy of inspiration we called “the Vortex.” One of us would write a scene and send it to the other with a note: “My apartment is a pigsty and I haven’t eaten all day. #inthevortex.” We wrote the book we wanted to read as teenagers: a supernatural thriller with healthy doses of horror and humor. Oh, and of course there’s romance. You have to wait a long time for the only kiss in the book, but isn’t that the case with all the best kisses in books?

Where do you start your stories from?

Malena: I was the one who had the original idea for Sparked and it had twin inspirations. First, when I was a kid, I had a recurring dream that I could move things with my eyes. The feeling was so real that I always woke up feeling disappointed I didn’t have a power after all. When I had the dream again as an adult, I started thinking about a teen character who wants to have a power but doesn’t. How would she feel if everyone around her was getting a power—including the mean girls who torment her at school? Laurel is a girl who feels that she’s always second best and I think many of us secretly feel this way.

Helena: So Malena was nursing her idea but wasn’t sure how to make it into a story. Then she and I went out for a drink one rainy Friday the thirteenth and I told her I wanted to write a YA novel but had no idea what to write about. Once Malena told me her idea, I was hooked. I started riffing. What about a love interest? Why don’t we throw in an ancient prophecy? We sat for three hours and created the entire plot. We decided to collaborate, naively thinking this would be half the work. And writing the first draft was dreamily easy. We had a total mind-meld. I’d go to send Malena an email in the middle of the night saying something like, “If we’re going to have a zombie animal in the book, the scariest possible creature would be a zombie bunny rabbit,” only to find she’d just sent me the exact same email.

Malena: Of course, once we sat down and reread that first draft, we found it wasn’t, um, quite as good we thought. We had to hunker down and do more drafts than I care to admit. We got rid of a gratuitous love triangle and, alas, that zombie bunny had to go too. It didn’t help that we’re both perfectionists, so when one of us said we were done, the other would decide it was time for another draft. We naively thought we’d be able to pound this story out in a year or so, and it ended up taking five years, on and off. Starting a story is easy—finishing it is what’s difficult! But even though collaborating wasn’t half the work, it was definitely twice the fun.