Today Cindy Pon and Month9Books are revealing the cover for SACRIFICE, book 2 in the Serpentine Series! Which releases September 27, 2016! Check out the gorgeous cover and enter to win a paperback copy of book 1, Serpentine!!

Here’s a message from the author:
I am so excited to share the Sacrifice cover with readers! I didn't think it was possible, but I love it even more than my gorgeous Serpentine cover. My second novel is always about dealing with consequences of what happened in the first book. Skybright was on a journey to discover the truth of her origins and identity in Serpentine, and I believe she truly comes into her own in Sacrifice. I love the prominent featuring of her crimson tail, and the tension and energy this cover conveys—it reflects the novel so well. I hope you enjoy Sacrifice!
On to the reveal! 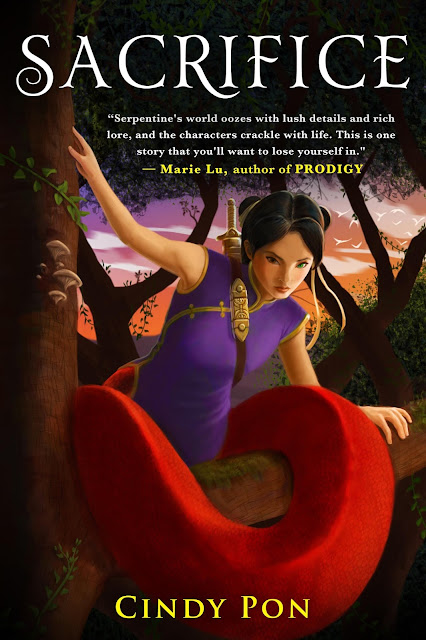 Title: SACRIFICE (Serpentine, Book 2) | Author: Cindy Pon | Pub. Date: September 27, 2016 | Publisher: Month9Books | Format: Paperback, Hardcover,  & eBook
Find it: Amazon | B&N | TBD |Goodreads
Sacrifice, the sequel to Serpentine, plunges Skybright into the terrifying underworld where demons are bred and whisks her up to the magnificent Mountain of Heavenly Peace where the gods dwell.
Stone is stripped of his immortal status and told to close hell's breach, which mysteriously remains open, threatening mortals.
Zhen Ni, Skybright's former mistress and friend, has been wed to the strange and brutish Master Hou, and finds herself trapped in an opulent but empty manor. When she discovers half-eaten corpses beneath the estate, she realizes that Master Hou is not all that he seems.
As Skybright works to free Zhen Ni with the aid of Kai Sen and Stone, they begin to understand that what is at risk is more far-reaching then they could ever have fathomed. 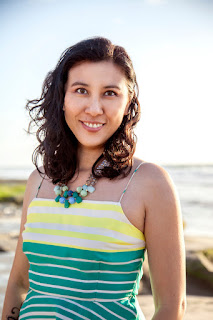 Cindy Pon is the author of Silver Phoenix (Greenwillow, 2009), which was named one of the Top Ten Fantasy and Science Fiction Books for Youth by the American Library Association’s Booklist, and one of 2009′s best Fantasy,Science Fiction and Horror by VOYA.The sequel to Silver Phoenix, titled Fury of the Phoenix, was released in April 2011. Her first published short story is featured in Diverse Energies,a multicultural YA dystopian anthology from Tu Books (October 2012). Cindy is also a Chinese brush painting student of over a decade. Visit her website.