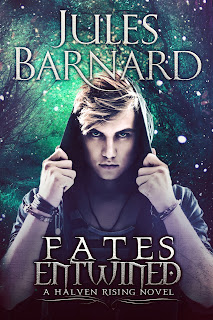 They can never be together. The notion is laughable. Humans are inferior, a scourge on the Fae and on the magic passed down to them by angels millennia ago. And if Keen finds himself drawn to the tiny human female, he keeps it to himself. He won’t add to the half-breed problem that threatens his people’s existence.

Reese can’t stand Keen. He criticizes her clothing, won’t answer a straight question, and is too handsome for her peace of mind.

Her entire life, people have pegged Reese for a shallow, ditzy blond. She won’t accept the stereotype from the large, arrogant Fae too. But after Keen saves her life, she begins to question what truly lies beneath his stoic demeanor.

Forced together, Keen and Reese fight to survive among enemies, and Keen makes choices Reese couldn’t have predicted. She glimpses a side of him that is protective and dangerously seductive.

But Keen refuses to acknowledge their connection.

Until he's faced with the decision to betray his people, or lose Reese forever.

(I received this book free form the author in exchange for my honest review)
My Rating: 5 stars

My my my, for a minute there I though this book would be a retelling of the first book but form Reese's POV.  So glade that minute passed in a hurry.

I love this series, it is simply amazing.

The writing was outstanding, this plot is on point and never lots. The romance is clean, as in, I wasn’t annoyed with it but wanted more of it that and, the instal-love didn’t even bother me because I was so enthralled with the story and the characters. In this case it actually helped with the two block heads we have as leads. I call them that because of the straight up denial they were in.

This book is a perfect match for it’s predecessor, fast, fun, full of action and a race once again to save it all. I’m hoping there is more book about this world, because I want more.

I highly recommend this book, this series, it’s the insta-love done right. 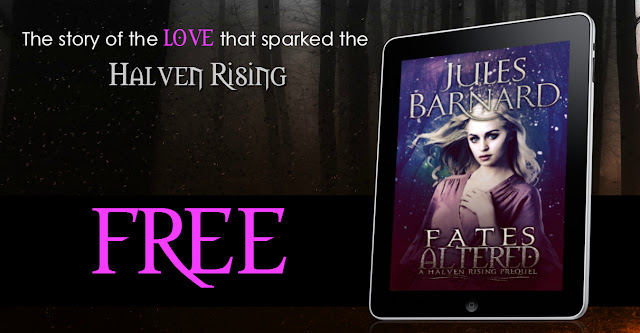 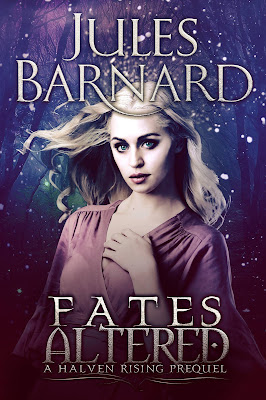 *This mature YA series is intended for readers 17 years and older.

Some love stories require great sacrifice…Humans are beneath her kind, but Fae princess Theodora Rainer must escape the Fae realm, or marry a man she despises. California farmer Alex Rosales is the responsible one. He stays out of the trouble his older brother gets into—someone has to hang onto the farm. But when Alex finds Theodora hiding out on his property, caution is nowhere in sight. She has the beauty of an angel, with deep secrets Alex can’t penetrate. No matter how hard he tries, Theodora won’t let Alex in. But when he breaks his own rules and invites her to stay with him, he glimpses her heart—only to discover something powerful seeks to tear them apart.Fates Altered tells the story of the love that sparked the Halven Rising. 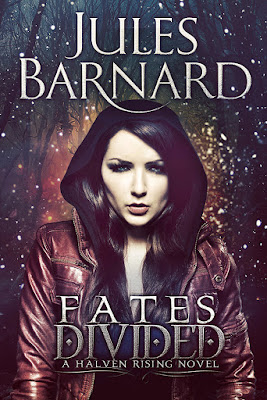 *This mature YA series is intended for readers 17 years and older.

Elena's goals are simple: 1) be the first in her family to graduate from college 2) become a kick-butt chemist. Until she comes into her half-Fae powers from the mother she never knew.The Fae are willing to harm the last of Elena's loved ones if she doesn't use her power over the elements to cure them of a deadly disease.Her brooding neighbor, Derek, isn't the friendliest guy, but he has access to an off-hours lab and is willing to help Elena create the antivirus. He has his own secrets to keep, and this business Elena is mixed up in could blow his cover. But when Elena and Derek get together, more than chemicals spark fire--and they soon discover just how complicated attraction can get when they find themselves on the other side of the portal, fighting for survival. Lives collide, and allegiance and love are tested, in Fates Divided. 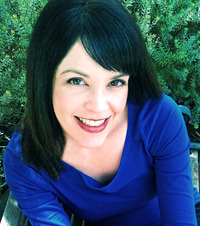 *Click HERE to sign up for Jules's New Release Newsletter. You'll be the first to learn of new releases and gain access to subscriber freebies, including FREE extra scenes.**

A RITA-nominated author, Jules Barnard began her publishing career in 2014 with Deep Blue, the first book in the contemporary Blue Series, hitting bestseller lists on Amazon, iBooks, and All Romance. In 2015, she launched Fates Divided, the first of a romantic fantasy series Library Journal calls “…an exciting new fantasy adventure.” Whether she’s writing about beautiful Lake Tahoe, or a Fae world embedded in a college campus, Jules spins suspenseful stories filled with realistic characters who have heart and humor.

When Jules isn’t in her sweatpants writing and rewarding herself with chocolate, she spends her time with her husband and two children in their small hometown on the California coast. She credits herself with the ability to read while running on the treadmill or burning dinner.