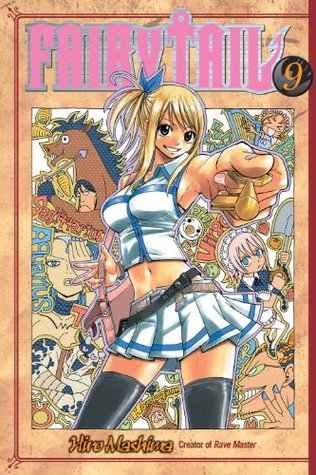 This is probably one of my favoured parts of the whole series, manga or anime.

When I started this series I was on the fence about Lucy. But after this volume, I'm impressed and now on team Lucy.

She showed her overpowering hateful father that she doesn't want his money, she wants to work, she wants to travel, and she will not stand for someone, even family, hurting her comrades/friends/new family. She took responsibility for running away, and apologized for not saying a word or contacting afterwards, but she put her foot down and flat out told him that he wasn’t going to control her life or her future anymore. It was mature. In that moment she wasn’t a spoiler teen, but a mature young woman making a choice, taking a stand.

She proved to be even more courageous when saving Loke. He always pulled away from her, and they weren't that close. But she did everything in her power, to the point of almost dyeing, to save him.

She’s loyal, kind and brave. Though she isn't the strongest in a fight, she doesn’t run, beat up or not.

I highly recommend this series, though it does have fan service, it isn't overpowering, and it doesn’t take up the whole story nor does it ruing it. I've seen worst, much much worst. In saying that, nothing about the fan service in this manga is offending.

I hope you give this story a try