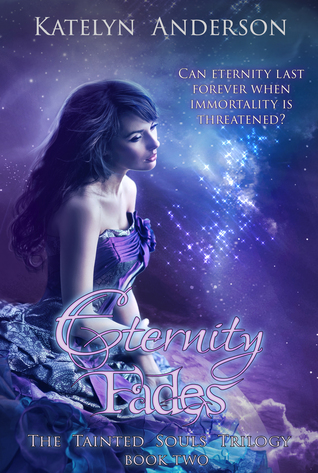 Eternity Fades
By: Katelyn Anderson
My rating: 4 of 5 stars

( I received this book free in exchange for my honest review )

Oh my freaking god! What an explosive ending, and that cliff-hanger, wow, just wow.

I know, I know, I had rather mixed feelings about the first book, but all those unsettling feels were washed away in this fantastic second installment. All the problems I had with the first are nonexistence in this one. The plot was smooth, on point and didn’t jump around. Sure there was still some re-explaining on Joan’s part, but I’ve accepted that as part of her personality. I’ve grown to like her more as a MC, she is slowly maturing, not as fast as I would like, but she’s getting there.

As I said the plot was smooth and the flow was near perfect. Everything was well connected, questions were answered and most of all that weird love-whatever-it-was in the first book was fully and properly explain, making it a crucial plot point instead of annoying plot filler. It was driving point and it was well executed throughout the book. I have a special place in Hades for Dane, but I can see that he is going to be the tipping point in the next installment. As much as I want to hate him, I quite enjoy is antics.

The only thing that I didn’t like, I didn’t see much of Joan actually fighting. She was in the background a lot, and I felt that Damian and Lorenzo were the stars and man, Damian, he is like my hero. He pretty much took over this story and as much as I know Joan is the MC, she just wasn’t shinning as much as I would have liked. In saying that, I would love to read a side story about Damian. He gave us some insight into his past in this book, and a short story about that would be epic.

And the feels! The Feels! At the end, well I had a feeling something like that was going to happen, but in my heart of hearts I was hoping that plot protecting would kick in; my heart in in tatters. This was such a bitter sweet ending, but more bitter then sweet. That cliff-hanger, I’m not a fan of them, but when done right it will have you on the edge of your seat, waiting for that next book. The danger isn’t over, the story hasn’t ended and I hope that Joan can step up

I can’t say why I’m so broken up about this book; it’ll ruin everything and then some. So take my high recommendation that you need to read this series. Its unique plot will suck you in; it will burrow into your heart and shatter it just when you think good has conquers all.