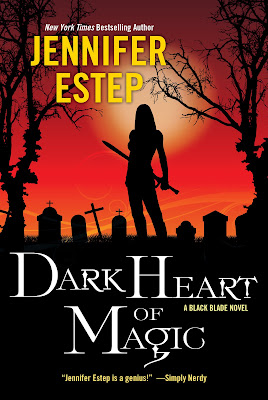 Something Wicked This Way Comes...

As a thief, I stick to the shadows as much as possible. But when the head of the Sinclair Family picks me to compete in the Tournament of Blades, there's no escaping the spotlight—or the danger.

Even though he's my competition, Devon Sinclair thinks I have the best shot at winning what's supposed to be a friendly contest. But when the competitors start having mysterious "accidents," it looks like someone will do anything to win—no matter who they hurt.

As if I didn't have enough to worry about, mobster Victor Draconi is plotting against Devon and the rest of my friends, and someone's going around Cloudburst Falls murdering monsters. One thing's for sure. Sometimes, humans can be more monstrous than anything else...

It's been a long time sing I found a series that has everything I love; magic, action, craziness, and a wicket kickass heroin. I haven't been this excited about a series since the Sabina Kane series. Though cliffhangers make me, angry, mad, and all sorts of irritated. I'm okay with it, book 3 isn't that far away, so I can deal.

I love the writing style, and the flow. It was steady, and I wasn't confused when the action and fast pace bather kicked in. I'm excited about this series, and I highly recommend it to everyone the loves magic and action. There is also the fact that our main is a thief. I love stories about thieves, but for me I find that I can't seem to find good ones, or ones that make me want to read it past the first chapter. Not this series, I'm addicted, and it's now on the top of my must follow/read/series list.

The wold building is out of this world, the detail and the realism isn't like anything I have ever read before. I have major deep feels for Lila, she loves bacon, I love bacon, we were meant to be friends, if it was possible for us to meet... and lets get back on track.

While I was reading, I kept thinking back to one of my favourite anime's, Yu Yu Hakusho. More so in comparison to the Tournament of Blades and Yu Yu Hakusho's Dark tournament. Though both are very different, I just couldn't help referring back and getting more and more excited, because since I've finally found something close to that joy I felt when watching that anime.

As I said, I highly recommend this series, this book. You will get capture by the fascinating world building, the fast pace action, and the mystery entangled with magic. 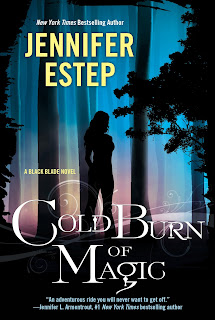 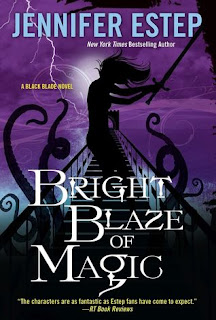 “What do you want to do about the troll?” I asked. “Because I don’t think he’s coming down from there without a fight.”
Devon was the bruiser, or second-in-command of the Sinclair Family, responsible for overseeing all the Family guards and dealing with all the monster problems that arose in Sinclair territory. Most of the bruisers for the various Families were arrogant jerks who enjoyed bossing people around and taking advantage of the other perks of their powerful position. But Devon was a genuinely good guy who treated everyone in his Family equally, from the smallest pixie to the toughest guard. Plus, he would do anything to help his friends and the folks he cared about, something he’d proven by putting himself in danger time and time again.
Devon’s inherent goodness and devotion to others were two of the many things that made me like him way more than I should have. His soulful green eyes, teasing grin, and rocking body didn’t hurt matters either.
Me? Good and I weren’t exactly close friends, and the only devotion I had was to myself, and making sure that I had plenty of cash in my pockets and food in my stomach. I was a loner thief who’d spent the last four years living in the shadows until I’d been recruited to be Devon’s bodyguard a few weeks ago. Not that he really needed a guard. Devon was a tough fighter who could take care of himself—and then some.
“Well, I say we pick up all the fruit that’s still in one piece and chuck it right back at the troll,” another voice suggested in a snide tone. “Let him see how it feels to get splattered for a change.”
I looked over at Felix Morales, Devon’s best friend and another member of the Sinclair Family. With his wavy black hair, bronze skin, and dark brown eyes, Felix was even more handsome than Devon, despite the fact that he was also covered in pulp. Not that I would ever tell him that. Felix was already a terrible flirt. We’d been in the square for ten minutes, and he’d spent more time grinning at the tourist girls who wandered by than trying to figure out what to do about the troll.
Felix winked at two girls in tank tops and short-shorts who were sitting on a nearby bench sipping lemonade, then waggled his fingers at them. The girls giggled and waved back.
I rolled my eyes and elbowed him in the side. “Try to pay attention.”
Felix shot me a sour look and rubbed his side.

Follow the Dark Heart Of Magic by Jennifer Estep Blog Tour and don't miss anything! Click on the banner to see the tour schedule.

Her Elemental Assassin series follows the life and times of Gin “the Spider” Blanco, a barbecue restaurant owner who also happens to be an assassin with magical control over the elements of Ice and Stone.

The Mythos Academy series focuses on Gwen Frost, a 17-year-old Gypsy girl who has the ability to know an object’s history just by touching it. She studies at Mythos Academy, a school for the descendants of ancient warriors.

Estep’s new Black Blade series is about 17-year-old thief Lila Merriweather, who has a Talent for sight, along with the ability to take magic others used against her to boost her own powers. She tries not to get involved with the Families who control much of the town, but ends up in the middle of a potential turf war. 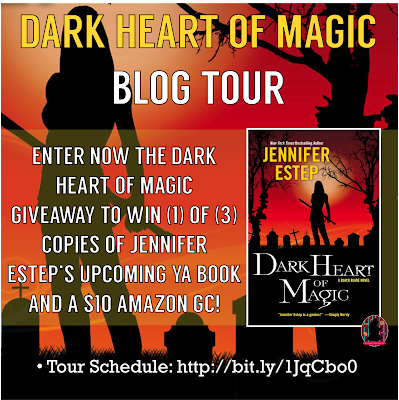